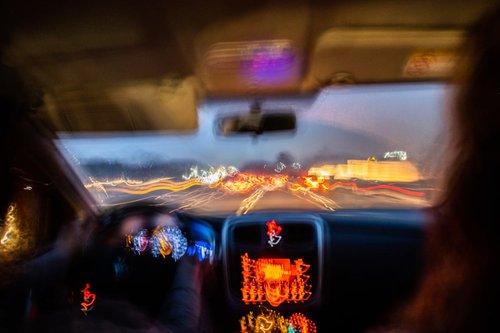 Drunk drivers are more likely to cause traffic accidents than sober drivers because alcohol affects the brain's information processing and sensory communications abilities. When consumed, alcohol begins to disrupt and slow the functioning of the central nervous system within five minutes, and even a drink or two will impede a driver's ability to track moving targets and multitask. A driver's ability to safely operate a motor vehicle is further compromised by every additional drink consumed. Given enough alcohol, at some point, a driver's central nervous system becomes so disrupted that the physical act of even opening a car door or starting the ignition becomes impossible.

You can learn more about alcohol's impacts on a driver's brain in our blog post, TorontoDUI Helps You Try to Understand the Effects of Alcohol. This blog will focus on how alcohol's impact on driving ability presents itself on the road when an impaired driver is behind the wheel.

The skilled DUI criminal defence lawyers at TorontoDUI caution that a driver does not have to consume much alcohol to be considered legally impaired in Ontario. They will add that it may not take much alcohol consumption for a driver to display any of the following signs of drunk driving.

Steering a motor vehicle in a controlled manner seems easy enough. Still, an impaired driver's ability to maintain control may cause them to swerve for no reason, weave or zig-zag within and outside their lane, cross middle traffic lines, make wide turns, and otherwise steer with an apparent lack of complete control. Generally speaking, a driver's control of the vehicle deteriorates with increasing levels of alcohol impairment. At some point, impairment is so significant that the loss of steering ability will lead to an accident.

Thus, police will typically pull over any vehicle and check the sobriety of any driver who displays erratic steering control. Many sober drivers have been pulled over for “crossing the double line" or because the police thought they were weaving. Not because the police were just being jerks, but because the police couldn't take the chance that the cause was a brief moment of distraction rather than potential impaired driving.

Drivers purposely roll through stop signs all the time, and people sometimes run through red lights, whether accidentally or because there are no signs of incoming cross-traffic. Impaired drivers do this, too, but are also more likely to commit other moving violations, such as speeding, illegal passing, driving the wrong way down one-way streets, and every other infraction possible. This happens because alcohol impairment impacts rational thinking, visual functioning, multitasking skills, and every other mental function that typically helps most sober drivers drive in a safe and legal manner. It also explains why police make many DUI arrests when investigating other traffic violations.

Many drunk drivers inherently know that their alcohol consumption has compromised their ability to drive safely. To compensate, many such drivers often try to steer in a manner designed to mimic the movements of the vehicle in front of them. Depending upon the level of intoxication, an impaired driver may have difficulty maintaining a consistent distance from the lead car, which can cause them to follow too closely. While a tailgating vehicle may indicate the presence of an impaired driver, a driver that makes frequent abrupt changes in the distance it keeps between their car and the lead car is often an even more significant indicator of impairment.

“Speed kills" is a long-stated traffic adage that tends to foster aggressive police response to speeding drivers. While slow-moving vehicles can kill, too, police tend to take an interest in slow-moving drivers because they are a relative rarity and may indicate impaired driving. Impaired drivers may drive noticeably below the speed limit for two primary reasons: 1.) they believe that such driving displays safe driving; and 2.) because they are so inebriated that they have trouble knowing what the speed limit is and can't keep track of how fast (or slow) they might be going.

Why Exactly Did You Have to Hit the Brakes Abruptly?

Because of their delayed reaction time, impaired drivers often have to slam on their brakes to avoid running stop signs and red-light signals or in making turns. Highly intoxicated drivers often hit the brakes for no reasonable reason at all, whether because they thought something was in the road or lost track of what they were supposed to be doing at that time. Police rightfully treat abrupt stopping with suspicion and will typically want to investigate the cause more closely. Drunk drivers are also prone to hitting the brakes when they see a police car. This also tends to raise a police officer's suspicion.

Police Do Not Need to Witness Signs of Drunk Driving

Ontario police on patrol are always on the lookout for these primary signs of drunk driving. But even absent such obvious signs of drunk driving, Ontario police have other means of identifying impaired driving. Roadside checks have long proven to be an especially effective tool for identifying impaired drivers. During such stops, police could lawfully assess any driver for signs of impairment and, if found, demand a roadside breath test. However, the effectiveness of these checks received a boost in late 2018 when police were given Mandatory Alcohol Screening (MAS) power through provisions added to the Criminal Code by Bill C-46. Prior to this, police needed to have “reasonable suspicion" before demanding the roadside test from drivers, whether those stopped at a roadside check or for other reasons. With the MAS provisions, police can demand alcohol screening from any driver for any reason during a lawful traffic stop.

Thus, instead of being concerned about what driving behaviors might alert police that you might be driving while impaired, maybe think twice before getting behind the wheel after drinking.

Consult with TorontoDUI for Your DUI Defence

If you are charged in the Greater Toronto Area for DUI, seek out the legal skills of an experienced DUI criminal defence lawyer. Our skilled DUI lawyers have a solid record in strategizing legal defenses that have led to withdrawn charges, reduced charges, mitigated penalties, dismissals, acquittals, and other favourable outcomes.

With more than 15 years of defending GTA defendants from all types of DUI charges, the DUI lawyers at TorontoDUI have successfully defended thousands of cases. If you or someone you know has been charged with a DUI, contact TorontoDUI for a free consultation.