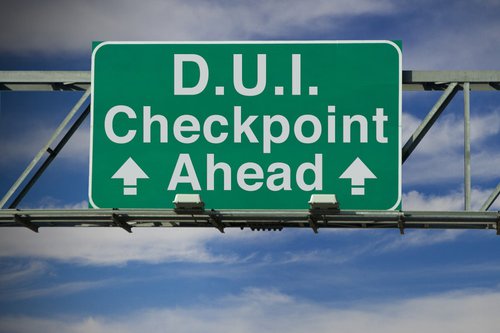 When you're driving at night and see flashing blue lights ahead, you probably start to slow down with the initial thought that the police have either pulled over a speeder or are at the scene of an accident. As you get closer, though, and see that police are directing drivers to stop in a coordinated fashion, you probably realize that you are approaching a police DUI checkpoint. If you have consumed any alcohol, smoked some marijuana or ingested other drugs, you might feel a rising sense of panic. The severity of this panic will likely be influenced by how much of the impairing substance you may have consumed, though you may not feel any panic under the highest levels of impairment.

Whatever your sense of panic or impairment level, taking evasive actions from the DUI checkpoint will probably not serve you well. A quickly executed U-turn or veer-down a side road will undoubtedly draw the attention of the police, who are typically prepared for such actions and ready to chase you down. While it may seem like a good idea at the time, know that such evasive action probably gives police more latitude to investigate your potential impaired driving than they would have had at the checkpoint.

Of course, depending upon your impairment and other factors, you might get charged with DUI in either case. But before you think about evading a Toronto-area DUI checkpoint, you should probably know a bit about how they work and what your legal rights are when stopped by one. Read on to learn everything you need to know about DUI checkpoints in Toronto and the rest of Ontario.

If you live in Ontario, you probably associate DUI checkpoints with RIDE (Reduced Impaired Driving Everywhere), a checkpoint program that police primarily use — and promote in the media — during the holidays. Developed by Etobicoke Police in 1977, its initial success quickly led to provincewide adoption. Not only does the program result in numerous arrests — 655 in the province during the recent Christmas-New Year's season — but it is believed to provide significant deterrence value, too. The combination of heavy media promotion and the visual presence of such checkpoints in major urban areas during the holidays reportedly makes people think twice about driving while impaired.

Opponents of DUI checkpoints have long held that DUI checkpoints constitute a form of arbitrary detention that contravenes protections provided by the Canadian Charter of Rights and Freedoms. Indeed, in several precedent-setting decisions, the Supreme Court of Canada has agreed that such checkpoints do, in fact, breach Charter rights. However, in their various decision-making, justices determined that the protection of public health offered by random checkpoints justified the Charter rights breach. While the high court has rejected outright legal bans on police use of such checkpoints due to the Charter breach, its decisions have restricted what police are allowed to investigate during checkpoint stops. Crucially, in R v. Mellenthin, [1992] 3 S.C.R. 615, the high court clarified that, in the absence of other reasonable and probable grounds to suspect criminal activity, officers at a DUI checkpoint can only check the motorist or vehicle for:

What This Means for You, the Driver

Because there are no DUI checkpoint provisions in Canada's Criminal Code, your rights at a checkpoint have essentially been mandated by Canada's high court. According to its rulings, even though you technically have the Charter right to remain silent, you must provide police with your name, address, and the registered vehicle owner's name and address, if it's not you. You are also required to provide the police with your driver's license and vehicle insurance information. You do not have to answer any other questions from the police, whether with regard to your activities, destination, or any other information.

Police cannot use a DUI checkpoint as an excuse to search your vehicle or to request that you open the trunk, glove box, or any closed storage containers. They are allowed to inspect the vehicle's exterior for safety reasons and can view the interior through the windows and with the aid of a flashlight if it's dark. However, the police can initiate a search if they see (or smell) evidence that suggests that you have been engaging in illegal activities. Such evidence could include the presence of contraband as seen through the window or the smell of narcotics, though police cannot use a DUI checkpoint as an excuse to use a drug-sniffing dog. While police are adept at finding reasons to initiate a search, the absence of a good reason can help establish a Charter rights defence against any charges resulting from the checkpoint.

During a DUI checkpoint, police can also request that you provide a roadside breath or oral fluid screening sample to check for impairment. Before 2018, police could only make such a request legally if they had a reasonable suspicion that the driver was impaired. However, the Canadian government amended DUI laws in 2018 to allow police to request such samples anytime, including during DUI checkpoints.

What To Do If You're Confronted by a DUI Checkpoint

If a DUI checkpoint stops you in Ontario, remember that the police only have the legal right to request basic information about the driver and vehicle owner, visually inspect the vehicle's mechanical safety from its exterior, and, yes, request a screening test. If police overstep these legal boundaries during a DUI checkpoint stop, it could be grounds for raising a Charter rights defence if you are arrested for DUI because of the stop. Thus, if stopped by a DUI checkpoint, only provide police with what is legally required. Be cooperative, but try not to answer any questions beyond the basic ones about identity and vehicle ownership and take note of any actions police take that seems to exceed their legal authority.

Turn to TorontoDUI for Your Ontario DUI Defence

The criminal trial DUI lawyers at TorontoDUI have successfully defended Greater Toronto Area defendants from all types of DUI-related charges for more than 15 years. Whether as the result of a DUI checkpoint or because you were pulled over for some other reason, TorontoDUI lawyers are highly effective at strategizing an effective DUI defence. If you or someone you know has been charged with a DUI or other criminal driving offences, contact TorontoDUI for a free consultation.