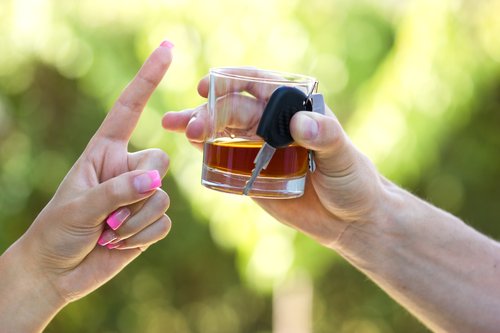 What Counts as a Drink?

Myths and Facts About Drinking and Driving

How to Avoid Drinking and Driving Situations

What to do if You are Stopped for Drinking and Driving

In Ontario, the criteria for impaired driving or driving under the influence (DUI) is based around the "over 80" rule. Specifically, if you have more than 80 mg of alcohol per 100 mL of blood, you are considered to be impaired. Several factors can contribute to the exact amount of alcohol it takes to put you over 80. These factors include your gender, weight, body type, and metabolism. Note that your alcohol tolerance does not necessarily factor into this – somebody who can drink more without showing the effects of alcohol consumption can still show up as legally impaired if they are forced to take a breathalyzer test. Just because a person can function well after drinking doesn't mean that they aren't at risk of getting pulled over or even arrested if they have enough alcohol in their system.

While the exact amount of alcohol a person can drink without becoming impaired varies depending on body type, it generally boils down to between two and three drinks over the course of a couple of hours. Somebody who has a very light frame might go over 80 with only a single drink, while somebody with a heavier body type might be able to drink as many as four glasses of alcohol before reading high on a breathalyzer test. However, the two to three drink threshold is a good measurement for most people. If you have had a couple of drinks at a social event, either have somebody else drive or wait for an hour or so to let the alcohol work its way through your system. This will ensure a safer driving experience and reduce your chance of reading over 80 if you do get pulled over.

What Counts as a Drink?

When trying to determine whether you have had enough to drink or not, keep in mind that most servings of alcohol count as one drink. The alcohol content for beer, wine, and spirits differs, but the standardized size of each serving allows people to give an approximate estimate of the alcohol content of each container. A pint of beer, for example, is roughly equal to one glass of wine, which is itself roughly equal to one shot of liquor. Of course, particularly strong drinks have a higher alcohol content than others. Modern bottlers tend to list the alcohol by volume, or ABV, content on the label so you know roughly how much alcohol you are imbibing. While most beers might have an ABV in the 5-6% range, for example, you should consider a beer with an 11% ABV to be the equivalent of two glasses if you are trying to determine how many drinks you can have before going over the 80 mg limit.

For those who wish to know more about drinking and driving, the effects of alcohol, and the punishments that you might face if you get caught driving over 80, the frequently asked questions below should help illuminate the matter further.

Despite the fact that virtually everybody recognizes drunk driving as a major hazard in Canada, a shocking number of people remain in the dark as to how widespread the problem really is. Here are a few statistics that outline the scourge that is drunk driving and how it affects the people of Ontario and beyond.

Myths and Facts About Drinking and Driving

Everybody seems to have heard somebody's old urban legends pertaining to alcohol and driving. Before you subscribe to any of the myths, make sure that you know these drinking and driving facts.

How to Avoid Drinking and Driving Situations

It's good to know the exact consequences that come from getting behind the wheel of a car after drinking alcohol, but how do you avoid those situations in the first place? The best solution is to make sure that you avoid situations where you might find yourself tempted to drink too much in the first place. While many people have a certain degree of control over their drinking, some parties and social situations can cause that control to slip, leading to a potential impaired driving charge. This is not to say that you should skip such social gatherings altogether, but it helps if you keep track of how much you drink over a certain span of time. Limiting yourself to only one or two drinks an hour can help keep you from getting too far over 80 at any point during the event.

If you know that you are likely to drink heavily, you should make arrangements to use a cab or to have a designated driver rather than getting behind the wheel of a vehicle yourself. If you call a cab to get you to the event, you won't have to worry about making a poor decision when it comes to driving yourself home.

What you do while you drink can also have an impact on your overall blood alcohol content. Making sure that you eat a meal or some snacks, for example, keeps something in your stomach and reduces your overall blood alcohol level. Similarly, staying hydrated by drinking lots of water can help your body flush out alcohol faster and more efficiently. Even when you enjoy yourself, you can still help fight off the possibility of making a drunk driving mistake later on.

Finally, if you want to be extra careful, you can consider buying yourself a pocket breathalyzer test. While these tests are not as accurate as the ones used by police officers, they can give you a rough estimate as to how much alcohol is still in your system before you leave. If you feel self conscious about using a breathalyzer, they are discreet enough that you can use them in the restroom or in another private area where nobody is watching.

What to do if You are Stopped for Drinking and Driving

"I've been charged with drinking and driving! What should I do now?"

If you do make the mistake of drinking and driving, then get pulled over and read as over 80 on the police's test, you should make sure to take certain steps to provide yourself with the best possible defense. First of all, you should write down your account of the situation as soon as you are able. Getting down a written report can help you make sense of the situation. It can also provide useful material for your impaired driving lawyer. The ability to compare your account to the written police report can prove invaluable. If the arresting officer made a mistake in protocol or seemed belligerent, this report can help your lawyer shed more light on the situation.

You will also need to find a drunk driving lawyer who can help defend you in court. Even if you plan to face the charges and plead guilty, an experienced lawyer can help you determine how best to handle the situation in court. Making a mistake on this level can mean the difference between losing your license instead of just facing a fine.

When you go looking for a drunk driving lawyer, you should prioritize experience and positive reviews from previous clients. You should also seek out a lawyer who is local to your area. This not only helps to reduce travel time on your meetings with your lawyer, but it also means that the professional you hire will have a good working knowledge of the preferences held by judges you might face in court.

The bottom line in all of this is that education about drinking and driving is an important factor in prevention. If you do make a mistake, be sure to defend yourself appropriately and minimize the chances of such a situation ever happening again.